The number of Minnesota divorces and annulments has been steady in recent decades, after an increase in the 1970s. The rate when compared to the number of people in Minnesota has been trending slightly downward.

The first graph is the total number of marriages and divorces, not the rate per thousand, and a larger number can be expected when there is a larger population.  However, the doubling in total divorces during the 1970 to 1980 decade seems higher than can be explained by the population growth (from 3,806,103 to 4,075,970). 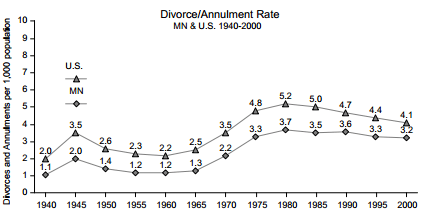 The rate for each thousand people in Minnesota during sixty years has ranged from 1.1 to 3.7, with the rate having a similar change as the total count of divorces during the 1970s.

These graphs are from a 2002 state legislative study.  The Centers for Disease Control was not getting enough data from Minnesota, and stopped trying to estimate the state’s divorce rate after 2004.

How Does an Affair Affect Divorce in Minnesota?

fMinnesota is a “no fault” state when it comes to divorce. This means that neither.
Read More

Can One Parent Be Obligated to Pay for College Expenses for Emancipated Children?

With the rise in college tuition expenses and student loan debt, many parents have discussed.
Read More

Where Does Your Family Pet Fit Under Minnesota Family Law?

A pet is considered a member of the family to many people. Although Minnesota family.
Read More

What is a “Void” Marriage in Minnesota?

Under Minnesota Law, there are some marriages that are prohibited and, therefore, automatically void.  In.
Read More

We Reached An Agreement And I Signed My Minnesota Divorce Decree So, I Am Divorced, Right?

The short answer is that no, the signing of your divorce decree does not mean.
Read More

I’m Getting Divorced in Minnesota, Who Should Move Out? Me or My Spouse?

There is not one right answer to the question of who should move out of.
Read More

The Schmitz Formula in a Minnesota Divorce Proceeding

If you used non-marital funds to purchase real property, you may need to apply the.
Read More

Is a Stipulated Divorce Decree a Binding Contract?